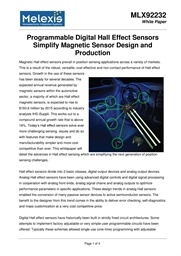 Magnetic Hall effect sensors prevail in position sensing applications across a variety of markets. This is a result of the robust, versatile, cost effective and non-contact performance of Hall effect sensors. Growth in the use of these sensors has been steady for several decades. The expected annual revenue generated by magnetic sensors within the automotive sector, a majority of which are Hall effect magnetic sensors, is expected to rise to $193.6 million by 2015 according to industry analysts IHS iSuppli.

Submit
Please agree to the conditions

In order to provide you with this free service, we may share your business information with companies whose content you choose to view on this website.