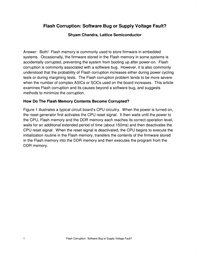 Flash memory is commonly used to store firmware in embedded systems. Occasionally, the firmware stored in the Flash memory in some systems is accidentally corrupted, preventing the system from booting up after power-on. Flash corruption is commonly associated with a software bug. However, it is also commonly understood that the probability of Flash corruption increases either during power cycling tests or during margining tests.

This article examines Flash corruption and its causes beyond a software bug, and suggests methods to minimize the corruption.

Submit
Please agree to the conditions

In order to provide you with this free service, we may share your business information with companies whose content you choose to view on this website.